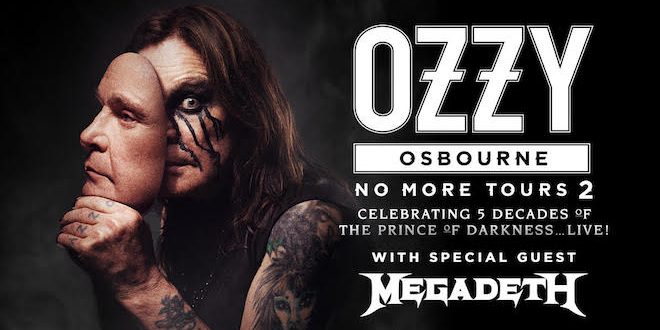 The Prince of Darkness is hitting the road again to celebrate 5 decades of depravity.

LiveNation has confirmed that all tickets for the previous dates will be honored on the new dates.

The Prince of Darkness has no plans on retiring any time soon despite the name of his current ‘No More Tours 2’ Tour.

Ozzy told Rolling Stone that this farewell tour just signifies that he won’t be doing any more world tours after its all said & done. Confirming that he will still be doing gigs, but just not any long term touring. Saying that he has experienced some fantastic things and its been an incredible journey, but he needs to slow down a little.

Being a grandfather as well has played a part in this decision as he said he doesn’t want to see another generation of Osbourne’s grow up without him around.

When it comes to a new album, Ozzy said that he has about eight or nine good song ideas to take into the studio.

Ozzy says that he will keep appearing on stage because it’s what he does and its the greatest love affair he’s ever had.

Filling out his backing band will be his longtime friend & guitarist Zakk Wylde, on bass Rob “Blasko” Nicholson, on keyboards Adam Wakeman, & on drums Tommy Clufetos, who also filled in on drums for the Black Sabbath The End tour.

See all the shows coming to Missouri on our Concert Calendar.