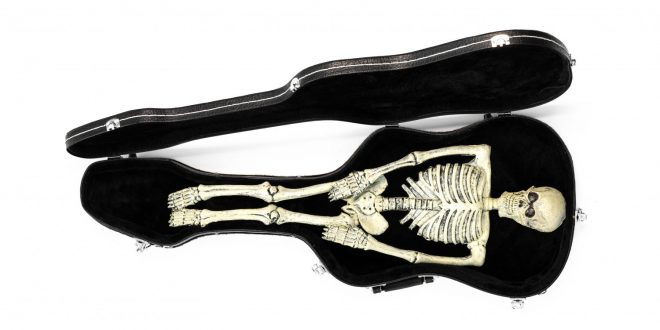 People have made guitars from just about everything you think would be cool or practical, but a man in Greece has gone above it all.

In an article from MetalSucks.net, a man calling himself Prince Midnight shared his story to the website about creating a guitar out of his dead uncle’s skeleton.

This all came about because in Greece cremation isn’t really approved by the orthodox religion of the country & none of his family wanted to pay for the rent on a cemetery space. So instead of just letting the bones of his uncle just sit there in a wooden box, he made a guitar out of it.

Prince Midnight shared that his uncle was the one that got him into heavy metal music and wanted to pay tribute to him. His uncle died in a car accident roughly 20 years ago and when he died his skeleton was donated to a local college to be used for the education of medical students. But recently the school no longer needed the skeleton. So Prince Midnight took it into his own hands to file for the paperwork to get the skeletal remains of his uncle.

He decided to turn his uncle’s skeleton into a guitar would be quite the challenge. He contacted Dean Guitars in Tampa, Florida for help, but that fell through so he went on with it anyway & just finished putting the guitar together recently.