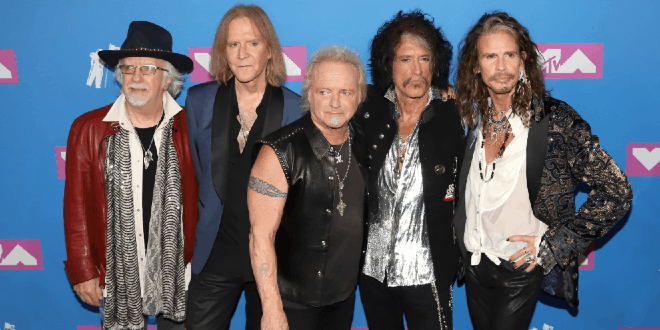 After he was denied by both the band & a judge to participate in Aerosmith’s Grammy show performance, drummer Joey Kramer has returned to the band’s lineup, according to a report from Ultimate Classic Rock. Monday night at their MGM Park Theater residency Kramer rejoined the band after being told he wasn’t physically able to play at the time.

Last year in April after a shoulder injury, Kramer was taking time off from the band to let it properly heal. This led to his drum technician to sit in for him in Aerosmith until he was ready to play again. When he felt ready shortly before the Grammy Awards Show he was told the rest of the band didn’t feel like he was emotionally or physically ready which led to a lawsuit by Kramer against the rest of the band. The judge sided with the band.

It now appears that in the few weeks since he was barred against playing with the band, Kramer is back in action behind his drum set to hold down the tempo for the band. Kramer was the first to take his place and when later in the show introduced by frontman Steven Tyler the crowd gave a big roaring cheer for the previously absent drummer.

It was also noted that during the set Tyler did spend some time upon the drum riser in front of Kramer’s drum kit mouthing some words in his direction, but it was unclear what he was saying at the time.

They kicked off their residency show Monday with “Let The Music Do The Talking” from their 1985 release Done With Mirrors.

Whether or not this proves all the previous issues are behind Kramer & the band are not seen as of right now. The current MGM Park Theater residency lasts until June 4th. Then after that, the band has a number of European dates going through September 18th.