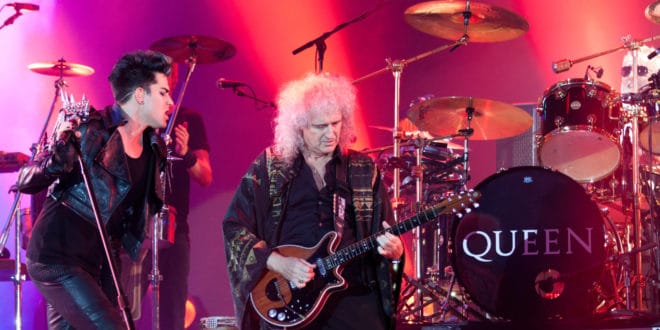 Ultimate Classic Rock has reported this past Sunday, February 16th Queen + Adam Lambert was scheduled to perform at the Fire Fight Australia show, which benefited the National Bushfire Relief. This was the first time the band had ever re-enacted their iconic 1985 Live Aid performance.

The original Live Aid performance by Queen is still regarded as one of the best live performances ever. The original set was six songs; “Bohemian Rhapsody”, “Radio Ga Ga”, “Hammer To Fall”, “Crazy Little Thing Called Love”, “We Will Rock You”, & We Are The Champions”. This was the same set that the current line up of Queen + Adam Lambert performed with video screens displaying the late Freddie Mercury doing the crowd participation parts from the original Live Aid show.

Queen guitarist Brian May has said about the disastrous brushfires that happened in Australia that it was Australia’s pain, but it was also humanity’s problem too. Drummer Roger Taylor added that the fires contributed to the climate change problem that affects the whole world.

See the whole performance from this past Sunday night from Sydney’s ANZ Stadium:

👑 For The First Time In Its History, Queen, Fronted By Singer @adamlambert will perform the Band’s Iconic 1985 Live Aid Set tonight for Fire Fight Australia Benefit Concert! 👑 Queen will perform in full its original 22 minute Live Aid set. The six-song set includes Bohemian Rhapsody, Radio Ga Ga, Hammer To Fall, Crazy Little Thing Called Love, We Will Rock You and We Are The Champions, and is widely regarded as one of the greatest live performances of all time! Fans can follow the event here on @firefightaustralia 🧡 Please donate over at ➡️www.firefightAustralia.com The sold-out event will air live in Australia on Channel 7 and 7plus, and FOX8 and Foxtel GO from 1pm AEDT on Sunday 16 February. UK audiences will be able to see selected highlights on Sky One HD from 8pm on Monday 17th February. #Queen #QAL2020 #firefightaustralia

After the success & critical acclaim of Queen’s biopic ‘Bohemian Rhapsody’ starring Rami Malek that also featured an entire recreation of the 1985 Live Aid performance, current Queen frontman Adam Lambert was asked what he thought of a possible ‘Bohemian Rhapsody’ Part two. Lambert didn’t see the reason for it.