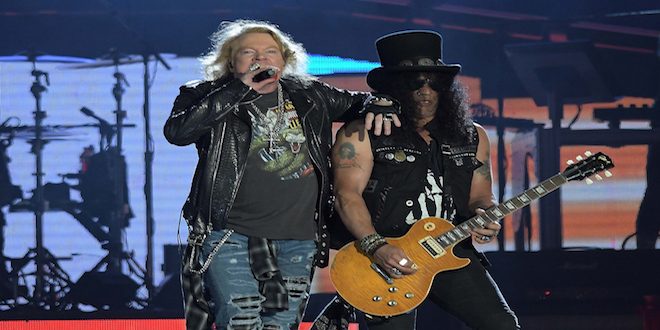 The first Guns N’ Roses album in over a decade could be in the works, according to Slash. In a recent interview with music critic Maso Ito (view below) Slash admit the band has been talking about putting out new material, “Axl [Rose], Duff [McKagan], myself and [guitarist] Richard [Fortus] have all talked about… there’s material and stuff going on already for a new record,” he said. “It’s just, with Guns N’ Roses, you don’t go, ‘Oh, there is a plan, and it’s gonna be like this,’ because that’s not how it works. So, basically, the only real answer to give is we’re hoping to put a new record out, and we’ll just see what happens when it happens.”

Although Guns N’ Roses went on the road in 2016 for their Not in This Lifetime Tour, they haven’t released an album since 2008’s Chinese Democracy. Since then Slash has been on the road with Myles Kennedy & The Conspirators to promote their new album Living The Dream. Axl Rose recently released a new song on Looney Toon’s called “Rock the Rock”, but should be free since AC/DC has tapped Brian Johnson to make their new record.