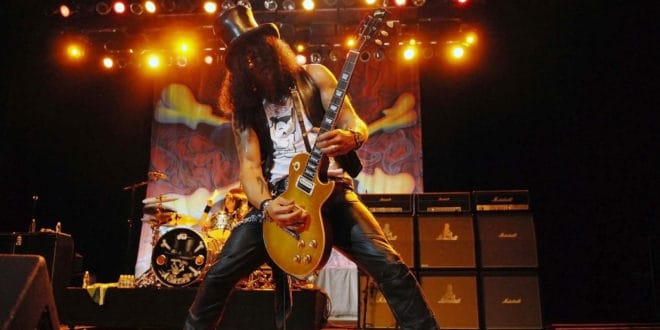 Slash’s Hair Used In Cake Topper You Can Buy

The cake topper that Slash & Perla Ferrar used for their wedding cake can be yours!

This is no ordinary cake topper as it has pieces of Guns N’ Roses’ Slash’s actual hair used for the groom figure’s hair. It is up for a buy it now price at eBay for $3000.

The cake topper also includes a 2019 letter from Julien’s Auctions that this is, in fact, the actual cake topper used by Slash & Perla’s 2001 wedding. Perla took possession of it in the pair’s divorce in 2018. It was then she put it up for auction originally.

According to the 2018 settlement that was obtained by TMZ, Slash got to keep all his guitars, and any musical compositions he owns, a truck, and the house in Beverly Hills. Perla got the house in Los Angeles, a Range Rover, & two Mercedes.

Their kids Cash & London, who Perla got primary physical custody of, will each get .09% of Slash’s income for the next 20 years.

Guns N’ Roses revealed last week that they will be releasing a children’s book in September based on their song “Sweet Child O’ Mine“.