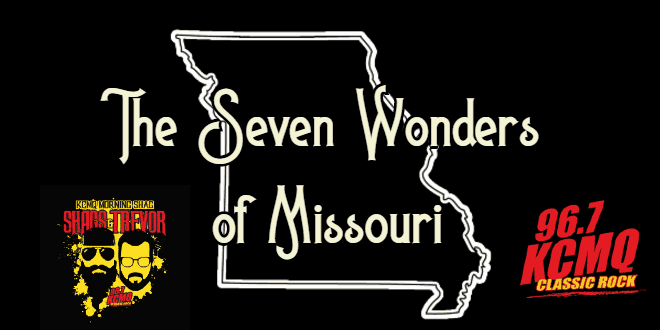 The Seven Wonders Of Missouri

The Morning Shag asked you to help craft the official list of the Seven Wonders of Missouri. After taking suggestions from listeners we came up with a list of 24 nominees and asked you to vote for your top 7 and the results are in!

THE SEVEN WONDERS OF MISSOURI:

Located on the site where Churchill delivered his famous “Iron Curtin” speech, The National Churchill Museum honors one of history’s most iconic leaders.

The unique geology of the Johnson Shut-In’s entice many to swim, hike, camp, and explore the beauty of this Missouri State Park.

5. Ozark National Scenic Riverways in the Ozarks of Missouri

With Missouri being the ‘cave state’, it’s no surprise that the most popular cave in the state was voted in. Meramec Caverns offers guided tours by trained rangers to show off the beauty and history of this Missouri Wonder.

This state park was easy to name seeing as how it’s the main attraction is granite rocks the size of elephants! Elephant Rock State Park offers memorable scenery, beautiful hiking trails, and plenty of spots to picnic.

2. Lake of the Ozarks

Boating, fishing, shopping, golf, and so much more. The Lake of the Ozarks affectionately known statewide as “The Lake”, is one of the state’s most popular attractions!

It’s no surprise that the most iconic monument in the state would be Missouri’s top voted wonder. The Gateway Arch towers of the city and holds the record as the tallest man-made monument. Visitors can ride up to the top to see a one of a kind view of St. Louis as well as learn about the history of western expansion in the museum housed underneath the monument.

Other finalists for the Seven Wonders of Missouri included: