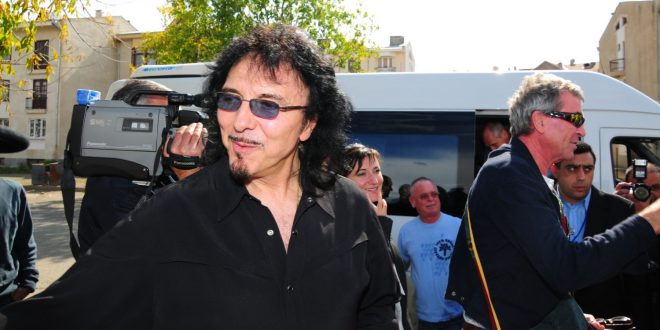 For guitarist Tony Iommi, he has had hundreds of amazing riffs throughout his career, but there’s one thing most fans may not know about how they came about.

In a new interview with Songfacts, the Rock & Roll Hall Of Fame guitarist Tony Iommi covered Black Sabbath‘s times with both Ozzy Osbourne and when Ronnie James Dio stepped in after Ozzy’s firing. When asked the difference between the two singers Iommi noted that Dio was more involved with the writing of the songs than Ozzy was, but that Ozzy was still great at what he did. What set Dio apart was that he was not only a great singer but an instrumentalist who had played bass in his career. This gave Dio, in Iommi’s opinion, the ability to bounce ideas back and forth between the two of them while writing music.

When Iommi was asked about what was the definitive songs for the band under both Ozzy and Dio, he said for the Dio years it was “Heaven And Hell” mostly because that was their first release with Dio and that even after Dio went on to pursue more solo work he continued to play the song because it was very popular for him. As for the definitive song with Ozzy Iommi said either their self-titled song “Black Sabbath” or “Iron Man”. He does note that “Paranoid” gets brought up a lot, but originally that was just a filler song and it was only released as a single because it was a shorter song compared to the others.

After bringing up the song “Iron Man” Iommie was asked how he actually came up with that riff. He said it was rather simple and in the moment as they were in their rehearsal room and drummer Bill Ward started playing the bass drum beat that is at the beginning of the song, which led to Iommi to bend the notes he was playing. He liked what was going on and then came up with the rest on the spot.

Iommi admits that most of the riffs he’s come up with during his career have been mostly on the spot. He went on to say his inspiration was this image in his mind of someone creeping up on you and he translated that into the riff and that’s how “Iron Man” got its ominous start and feel.