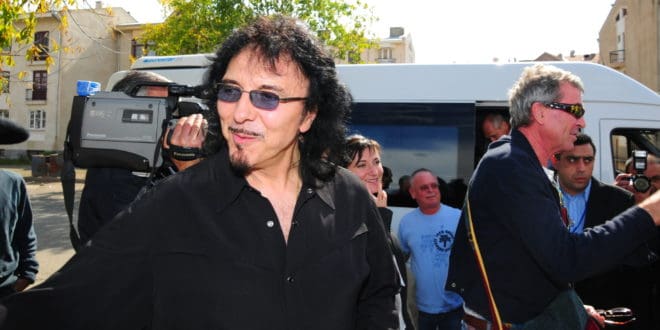 During a recent interview legendary Black Sabbath guitarist Tony Iommi was asked if he liked the way things ended with Black Sabbath.

Iommi said it was good, but he felt bad because his health, for the most part, dictated what & when the band could do for this final tour. He did take his doctor’s advice when he was told he needed to try and calm it down a bit.

He also mused on the idea that if Ronnie James Dio was still alive right now that after all the Ozzy Osbourne reunion stuff with Black Sabbath that he would have gone out & done something with Dio as well because he was proud of the band at the time Dio was fronting Black Sabbath.

Iommi was also asked about the possibility of Black Sabbath doing a one-off concert in the not so distant future as well. He said he was very open to the idea and that it would be good, but it would also be a very hard thing to do as well. One of the biggest things is getting the crew together because their whole setup is huge. He then went on saying it would end up having to be a year or 18-month long tour, which he said he wasn’t opposed to, but it would have be done in a different way.