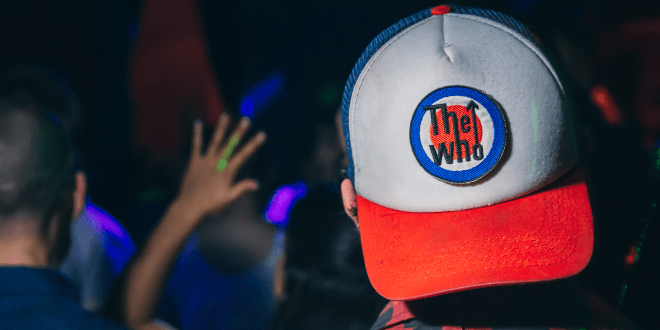 Among one of Rock’s most iconic bands, The Who have had a vast anthology of tracks that have stood the test of time.

Their roster featured one of the best drummers of all time in Keith Moon, the thundering bass work of John Entwistle, guitar smashin’, windmill strumming Pete Townshend, and the powerful vocals of Roger Daughtry.

This was tough, but we’ve put together our picks for the Top 10 Best Who Songs of all time.

This song is impossible to refuse. It is as if we’re compelled to “join together with the band” and at least sing along to the chorus. Just don’t take the song too literally. Pete Townshend once threatened to kill anyone who came up on stage during their Woodstock performance.

Arguably the strongest song the band’s rock opera Tommy, Pinball Wizard tells the story of a deaf, dumb, and blind kid who can outplay anyone at playing pinball. Even if you didn’t watch the rest of the rock opera, Pinball Wizard has a compelling story all on its own. We just wish were better at Pinball…

A song of revolution, but with a cautionary ending. With the new boss, being the same as the old boss. Roger Daughtry’s scream in this song goes down as one of the best in rock, which is just one of the reasons it makes our list.

This is the last track on The Who’s rock opera Quadrophenia. It’s an epic piece that is almost spiritual in its delivery. You can feel the anger and frustration in the screams. But the power of the song comes from the rest of the band’s driving composition.

This song has many redeeming qualities. It’s fun, upbeat, and is an amazing example of how the accordion of all instruments can rock. However, we’d be lying if our top reason for loving this song is the innuendo it suggests. Tip of the hat gentlemen.

Though it came out in 1965, this song has been adopted by multiple generations of fans as an anthem of rebellion. It’s a classic take on how old people just don’t understand the young. It’s also one of the best songs that features a stutter ever!

Before it was the theme song to CSI, Who Are You was an in your face rocker about a day in the life of Pete Townsend. Ironically, Pete’s memories of writing the song are a bit hazy, as he was working through a hangover at the time. We can only guess that the song wouldn’t have the same feel if he wrote it sober.

In one of the most unique songs from the band, Eminence Front examines the Post-War dream that rock had sang about for years, but had yet to come to life. The song argues that many of the time who are showing off their glamour and prestige are simply faking it. “It’s a put-on”. It’s a condemnation of the ‘greed is good’ lifestyle and how rock had changed from the hippie movement to arena rock star persona. An image the band helped push.

According to Townshend, his song is about “how lonely it is to be powerful”. This song’s relatable theme is one of the reasons for its longevity. Everyone has gone through a time in their life when they felt like no one understood them. This song speaks to that in a beautiful way.

This song’s hypnotic keyboard/ synthesizer is the shining example of how to utilize the instrument. The title of the song is never said, which caused many uninitiated to think the name of the song was “Teenage Wasteland”. The song’s actual title comes from  Meher Baba and Terry Riley, two of Townshend’s mentors in both music and philosophy.

Obviously, The Who has many more fantastic songs that did not make our list. Let us know the ones you think should have made it on our Facebook page.