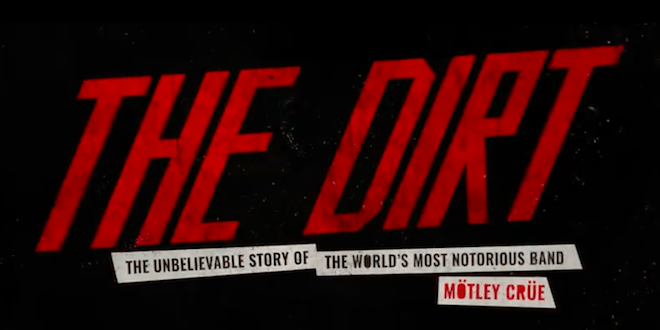 Mötley Crüe’s biopic The Dirt: The Unbelievable Story of the World’s Most Notorious Rock Band is now available on Netflix.

“Their music made them famous,” a caption read. “Their lives made them infamous.”

Mötley Crüe’s movie memoir The Dirt, highlights antics that made the band infamous. Focusing on the partying, debauchery, big hair and stage performances that made the band infamous are the focus with more a sparse few serious moments like Vince Neil’s tragic car wreck and Nikki Sixx’s heroin OD. The band’s music is used throughout the film to keep the pace moving along with little focus on the actual making of the music (until after Neil’s stint in rehab when the band struggles to regroup).

The Dirt: The Unbelievable Story of the World’s Most Notorious Rock Band is now available on Netflix. Watch the movie trailer here.

The opening scene opens with Nikki Sixx setting the tone- snarky, cynical and ready to rebel against all authorities all the time. Glossing over the member’s upbringing endears us to them quickly in a series of flashbacks. Sixx as a downtrodden bastard raised by a mess of a mother, Mars’ degenerative medical condition, and Tommy Lee’s “normal” upbringing and lust for love brings a puppy-dog feel and is often brought in as comic relief.

The band is well cast, with Douglas Booth as Nikki Sixx and Colson Baker (aka Machine Gun Kelly) giving stellar performances. Tommy Lee’s allegations of abuse are downplayed with him punching his fiancée in the face with the band members sitting idly by. Mick Mars’ back condition is briefly mentioned in the beginning but not addressed the rest of the film. In one scene where Mars turns down having meaningless sex with groupies it’s alluded that it’s too painful for him to hook-up. Neil’s storyline is the darkest- including the fatal car crash that took killed their friend “Razzle” and sent him into rehab as well as his daughter’s cancer diagnosis. Horribly miscast is Pete Davidson as Tom Zutaut, an A&R rep from Elektra records who signs the band. A bad wig and an effort to appear nerdy and aloof just confirm Davidson’s place on SNL- even the deadpan zinger ““Bottom line is, don’t ever leave your girlfriend alone with Mötley Crüe, ever. Because they will f*ck her.”

Sex, Drugs, and Rock & Roll are prominent from the beginning with plenty of eager groupies ready to jump on the band- even if their boyfriend is waiting outside the door. Taking bumps off a chick’s backside foreshadows Sixx’s eventual heroin spiral and surprisingly light-hearted portrayal of his OD. The last half hour of the movie seems aimless trying to tie up loose ends and make amends. An anti-climactic ending falls short with a backshot of the band entering a stadium for another pyro-fueled concert.

Overall, the film glosses over the story of the “World’s Most Notorious Rock Band” with few dips into heavier subject matter. I thought the movie quickly hooked you and was fast-paced to match the raucous energy of the band. Don’t expect this to rival Bohemian Rhapsody’s storyline or cinematic style- The Dirt is here to shock and entertain. Entertaining, yes. Factual? No.

Movie biopics are all the rage this year with Queen’s smash Bohemian Rhapsody, Joan Jett’s Bad Reputation, and Lynyrd Skynyrd’s If I Leave Here Tomorrow. Keep an eye out for Elton John’s Rocketman and the Poison biopic “Nothing but a Good Time,” (due in theaters Thanksgiving 2022).