Woodstock50 has dropped an interesting lineup featuring two returning artists and mostly modern acts.Headliners like Miley Cyrus, Jay-Z and Chance the Rapper pander to the younger crowd- they weren’t even born before the iconic music festival. The majority of artists performing at Woodstock50 are newer acts that have only been around for about a decade.

Celebrating the 50th anniversary of the most iconic music festival, Woodstock50 takes place this August in upstate New York. Woodstock50, put on by co-founder of the original Woodstock Michael Lang, will be held at the racetrack in Watkins Glen, NY.

The few classic rock acts that are scheduled to play include artists Santana & Canned Heat (the only acts from the original festival to return), Robert Plant and the Sensational Space Shifters, John Fogerty, Dead & Company, and David Crosby and Friends.  Some of the late great Woodstock performers such as Janis Joplin and Joe Cocker will be honored with tribute sets played by newer musicians. (Rolling Stone) More acts are expected to be added to the lineup but no exact date has been announced (see lineup below).

The original site has since been turned into a museum and cultural center, which will host the Bethel Woods Music and Culture Festival on the same weekend. Live performances, TED-style talks, and artifacts from the 1969 festival will honor the 50th anniversary of Woodstock on its original grounds. Artists announced include Ringo Starr and his All Starr Band joined with Woodstock alums Edgar Winter Group and Arlo Guthrie, plus Santana (at this time the only artist to play both 50th anniversary celebrations) with the Doobie Brothers.

Checkout the history of Woodstock’s lineups below. 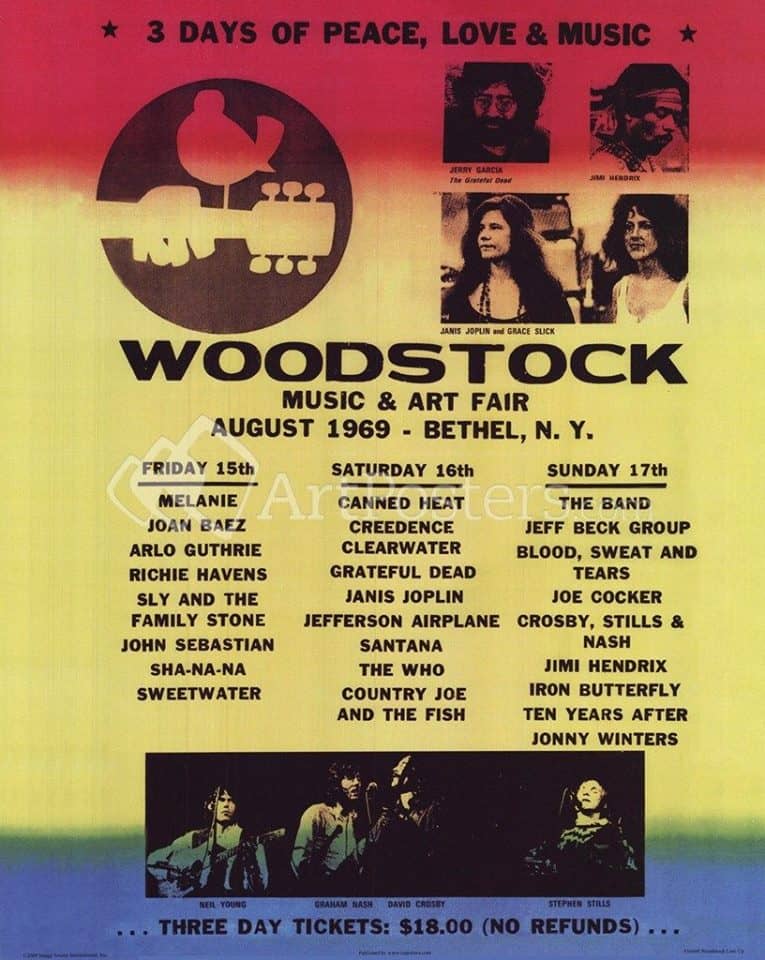