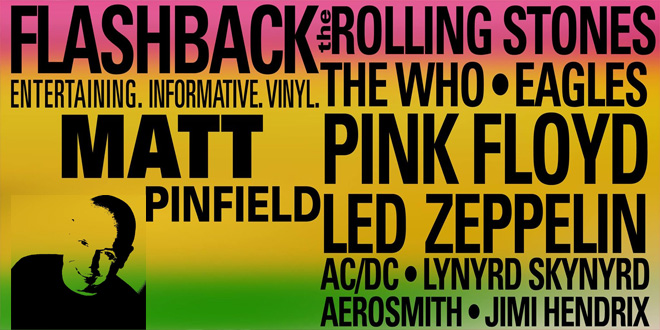 Then in his second hour will have a feature on Eddie Van Halen’s Birthday with some amazing songs from the Van Halen catelog!

Flashback, the country’s number one retrospective radio program, is now hosted by influencer, Rock insider and MTV legend, Matt Pinfield. Entertaining. Informative. Vinyl. Travel back in time and celebrate killer Classic Rock with the era’s best music from The Who, ZZ Top, Led Zepplin, The Rolling Stones, Eagles, Van Halen and many more. Flashback fuses Classic Rock with the newscasts, TV and movie clips, vintage commercials and comedy that defined the time. As a living music encyclopedia, Matt not only connects the dots, but gives listeners a rich behind-the-scenes perspective unlike any other.