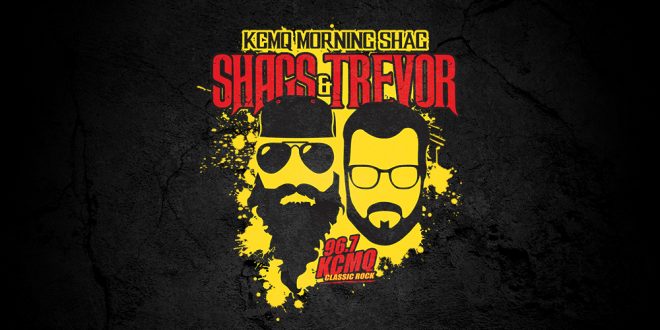 The Morning Shag with Shags & Trevor

Top of the Hour Shower Thoughts: Morning epiphanies from the shower. Nothing dirty, more enlightening.

Just Say Yes!: The easiest game we have at KCMQ! Shags and Trevor will ask caller 7 four questions. All they have to do to win is ‘Just Say Yes’. The only thing is, you may not want to…

Place of Birth: I was born a tree huggin’ hippie in Clatskanie, Oregon.

How long I’ve been in radio:  Roughly 10 years but I only really remember parts of 2…

What do you do at KCMQ? Babysit Shags and try to bring a level head to the conversations he brings up.

Where do you hail from? Ballwin, Mo.

What would you be doing if not in radio? I’ve always said I would either be a rock front man or a game show host.

What is the one thing we need to know about you? I’m a nerd, an “old man trapped in a young man’s body”, and am lactose intolerant. I also love CCR, hate tequila, am not an alien, or a serial killer despite Shags trying to convince all of Mid Missouri otherwise.

Favorite Movie? I’ve always hated this question. It’s like asking what your favorite song is. It’s impossible to answer!

Best advice you have ever received? At the end of every class, my history teacher in high school would say, “Don’t get caught”. One day we asked him why he said that. He explained that since we were teenagers, it was natural that we were going to do stupid things. It’s a part of growing up. No need for you to get in trouble over something that is natural. That has always stuck with me, even into adulthood.

Favorite artists: Led Zeppelin, AC/DC, The Allman Brothers, The Beatles, Boston, The Guess Who, Queen, Bob Seger, Rush, and The Who, among others.

Why did you get into Radio? Growing up, I always enjoyed making people laugh and feel better. I would crack jokes with friends and strangers alike just to make people smile and go about their day in a better mood. I found that in radio, I could do that on a massive scale. The best compliment I get is when people come up to me and tell me that they had a crappy morning, and we turned it around for them. That’s why I get up before the sun, and why I have the bedtime of a 9 year-old.